Which SEC Programs Rely the Most on Donors? 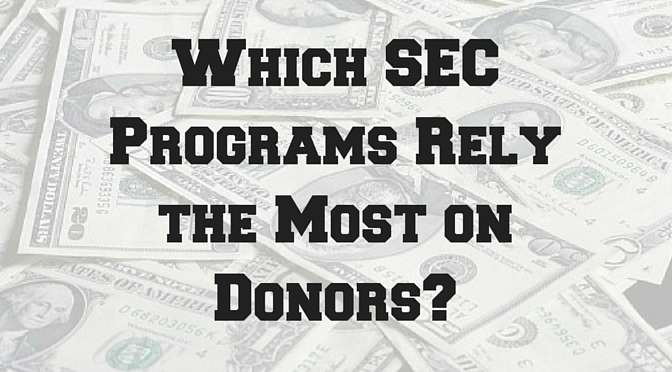 It’s been awhile (ok, five years – sorry, I’ve been busy) since I’ve looked at which SEC donor bases have the deepest pockets.

I wrote a piece today for Forbes on Missouri’s reduction in donations following a tumultuous fall in Columbia, and as part of that piece I pulled contribution numbers for all of the SEC schools (except Vanderbilt, which is a private institution not subject to public records requests).

Here’s a look at the numbers for fiscal year 2014:

Keep in mind: in most cases donations come in through a foundation or booster club and are then transferred to the athletic department. The numbers here represent only what was moved into the athletic department, which may not represent all monies collected. In some years you’ll see large transfers because of a new facility being constructed. So, the amounts do vary somewhat from year-to-year.

Here’s what I find most interesting, however, now that I’ve got some new numbers to compare to the numbers I had five years ago. Despite other revenue categories growing (especially television), 12 of the 14 SEC programs have become more dependent on donations as a major source of revenue since I last did this study.

Here’s a look at how donations, and the percent of revenue that was derived from donations, have changed for each school since fiscal year 2010:

No doubt, you’ll notice that Mississippi State reported $0 in contributions in fiscal year 2010. I explained that more in-depth five years ago when I wrote my last piece, but essentially it was because the athletic department didn’t need to pull any money over from its booster organization that year.

I’ve spoken with development folks in athletic departments in the past who were concerned that the larger television deals and conference networks would make donors think their money wasn’t need anymore, but clearly they’ve done a good job retaining those donors thus far.

Source: all financial data presented here is from reports each school files annually with the NCAA