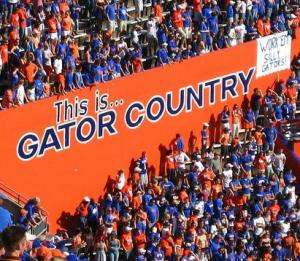 Student Section at The Swamp

Last week I looked at student ticket prices in the Big Ten for football and basketball. Today we’re going to look at the SEC and take it a step further (I’ll update the Big Ten piece with this extended data soon) by looking at the number of student tickets available at each university and what percentage of the stadium’s total capacity is reserved for students.

You’ll note that Alabama’s data is incomplete. Unfortunately, calls to their athletic department for the last couple of weeks have not been returned. Due to the incredibly difficult situation in Tuscaloosa following last week’s tornado damage, I’ve decided to post this story without waiting for Alabama’s response. If anyone from Alabama reads this and can provide the information, I’d be happy to update the chart.

If you read the piece on Big Ten student ticket prices, you’ll remember that Northwestern was the only school who did not charge for football tickets. We have two in the SEC: Vanderbilt and South Carolina.

What stood out to me first was how few student tickets are available at Kentucky, Mississippi and Vanderbilt.

The former two are at or below half of the average number of student tickets available at schools in the SEC, while Vanderbilt is just above the half-way mark. If you take a look at the percent of total stadium capacity reserved for students, Vanderbilt is above the average while Kentucky and Mississippi fall far below the average.

I’m impressed that schools like these six would offer so many student tickets when I’m quite sure they could all make more money by offering more of those tickets to the general public. None of these schools have attendance problems and are generally sold out. There’s no doubt in my mind they would still sell out even if the student population were more limited in their access. I’ve often heard students complain that more tickets aren’t offered to students, but I’m surprised to find just how many are offered when the school has the opportunity to make more money if they were to sell them to the general public.

If you missed the Big Ten piece, however, let me point out that Michigan has no limit for student tickets, but allows all those who want one to purchase. No school in the SEC operates in this manner.

One last note on the SEC versus the Big Ten before we move on to basketball: which is more expensive? Turns out the Big Ten’s average of $145 per student football ticket is more than twice the SEC’s $56 average.

Now on to basketball:

As you can see, a larger percentage of available seats are offered for basketball as compared to football and quite a few schools offer basketball season tickets for free.

I’ll leave you with a some questions. Why do Kentucky and Mississippi reserve so few seats for students? How do you feel about the percentage of stadiums and arenas that are reserved for students? Is it enough?

Thanks to my research assistant Spencer Anderson for his research on this piece!

How Does the Mid-American Conference Stack Up Financially?
How Much of a Drain are “Other Sports”