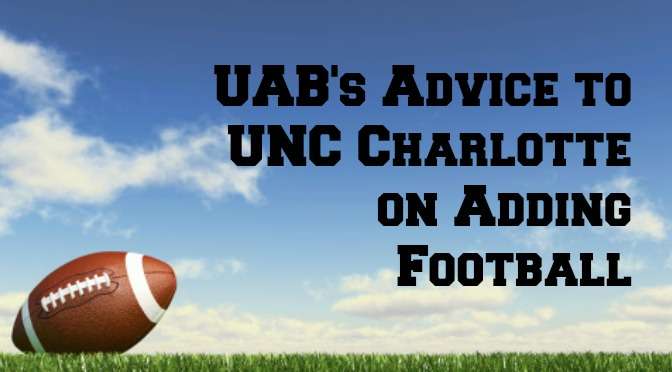 When UNC Charlotte was exploring the addition of football, it reached out to athletic directors and provosts at other institutions for advice and asked each a set of questions regarding their own experience. This was done prior to UNC Charlotte’s 2008 vote to add football, so the landscape of major college football looked a little different.

Here’s how UAB’s athletic director Brian Mackin responded to each of the questions asked in the UNC Charlotte study:

“At UAB, the President wanted football to help meet the university’s mission, therefore he supported (and current president does also) football with supplemental funding from the university. In the state of Alabama, the division of football you play is very important. (I-A) Conference Affiliation is very important. Identify who you want to be associated with. For UAB, it was important to be in a league with Southern Mississippi and Memphis, so Conference USA is a great fit.”

“Unintended Consequences – On the front-end there was a miscommunication with the Trustees in regard to the goals of adding football. There is a need to have ownership from the “top down”—– total buy in. UAB has that now, but not sure we (UAB) did originally.

Intended Consequences – Start football, D I level and have a conference affiliation. Now we are “a complete” athletic program with football, that serves all sports. Conference USA is the perfect fit for us.”

3. Is there any advice that you would give as UNC Charlotte studies football?

“What Joe Gottfried did at South Alabama was smart……had a plan to sell a minimum # of season tickets prior to committing to start football. UAB just jumped in with no plan. You need a plan due to economic impact unless your President/Chancellor will subsidize the program at $4-4.5 million per year. I know you are aware of Title IX consequences.

Talk with marketing folks. We deal with ISP now-suggest you go external. We increased revenue from $200,000 to $1.4 million after we used external firm.”

And here’s how UAB’s provost responded to UNC – Charlotte, according to the report:

“The Provost commented that it seems to take a very long time to build a fan base. Attendance at games fluctuates with the wins and loses. He thinks that the size of the market is really important. Birmingham doesn’t have a professional team. There is a lot of allegiance to Alabama and Auburn football and UAB can’t really compete with them for interest. UAB has about 15,000 students total and a much smaller alumni base than Alabama or Auburn. But there is a real struggle in the state around student recruitment and with a generally younger student body, UAB has been trying to create a more traditional campus atmosphere. He did not have any comments on the impact of football on the academic programs except to say that having a marching band had been helpful to the music program. Other than speaking favorably about how the band was a cohesive group and seemed to function like a learning community, he didn’t have much to say about what football had actually contributed to student recruitment or the student experience. He had no comments on scholarships, fund raising or financing. UAB plays in Legion Field which is now old and in need of repair. UAB doesn’t have space on campus for a stadium.”

If you don’t know, UNC Charlotte did decide to add football. The 49ers played their first game in 2013 and will move up to FBS next fall.