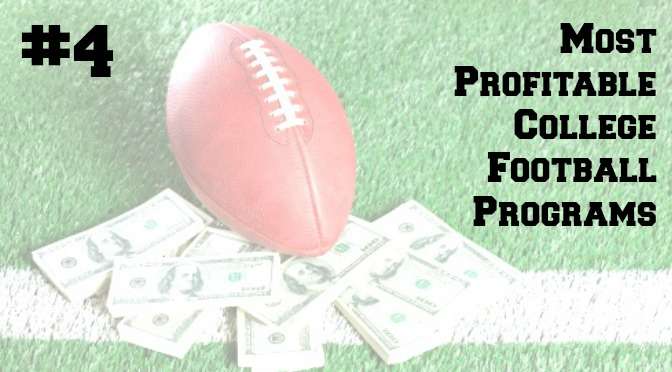 For the next few weeks, I’m going to break down the Top 10 most profitable (with nonprofits it’s technically net revenue, not profit, but that doesn’t roll off the tongue) college football programs from 2012-2013. I’ve already posted #1, #2 and #3.

If you’ve done the math, you noticed football produced excess revenue of $49.1 million. What happens to that money? Along with excess revenue from men’s basketball, it essentially funded the rest of the athletic department, which includes 523 total student athletes. Sports outside of football and men’s basketball operated at a total loss of $46.7 million, and the department had another $47 million in expenses not directly attributable to just one team, including nearly $16 million in facilities expenses (rent, utilities, maintenance, etc.).

Florida athletics also reported contributing $7.6 million to the University of Florida for non-athletic initiatives. However, thanks to $28 million in revenue not directly attributable to one sport, including nearly $6 million in endowment and investment income, and almost $16 million from television and radio (not generated at the conference level but from UF’s individual deals) and royalties/licensing revenue, the athletic department had overall net revenue of $15.5 million after its contribution to the University.

So, Florida athletics has excess revenue of $15.5 million just padding its bank account, right? Not really. It’s important to note $11.3 million of the revenue reported for 2012-2013 was generated from capital contributions – in other words, fundraising campaigns specifically for facilities projects. According to audited financials, those capital contributions were raised for the renovation of the Stephen C. O’Connell Center, the “Gateway of Champions” football front door project, renovation of the Carse swim dive facility, and improvements to the lacrosse stadium and various other projects.