The latest news and notes. 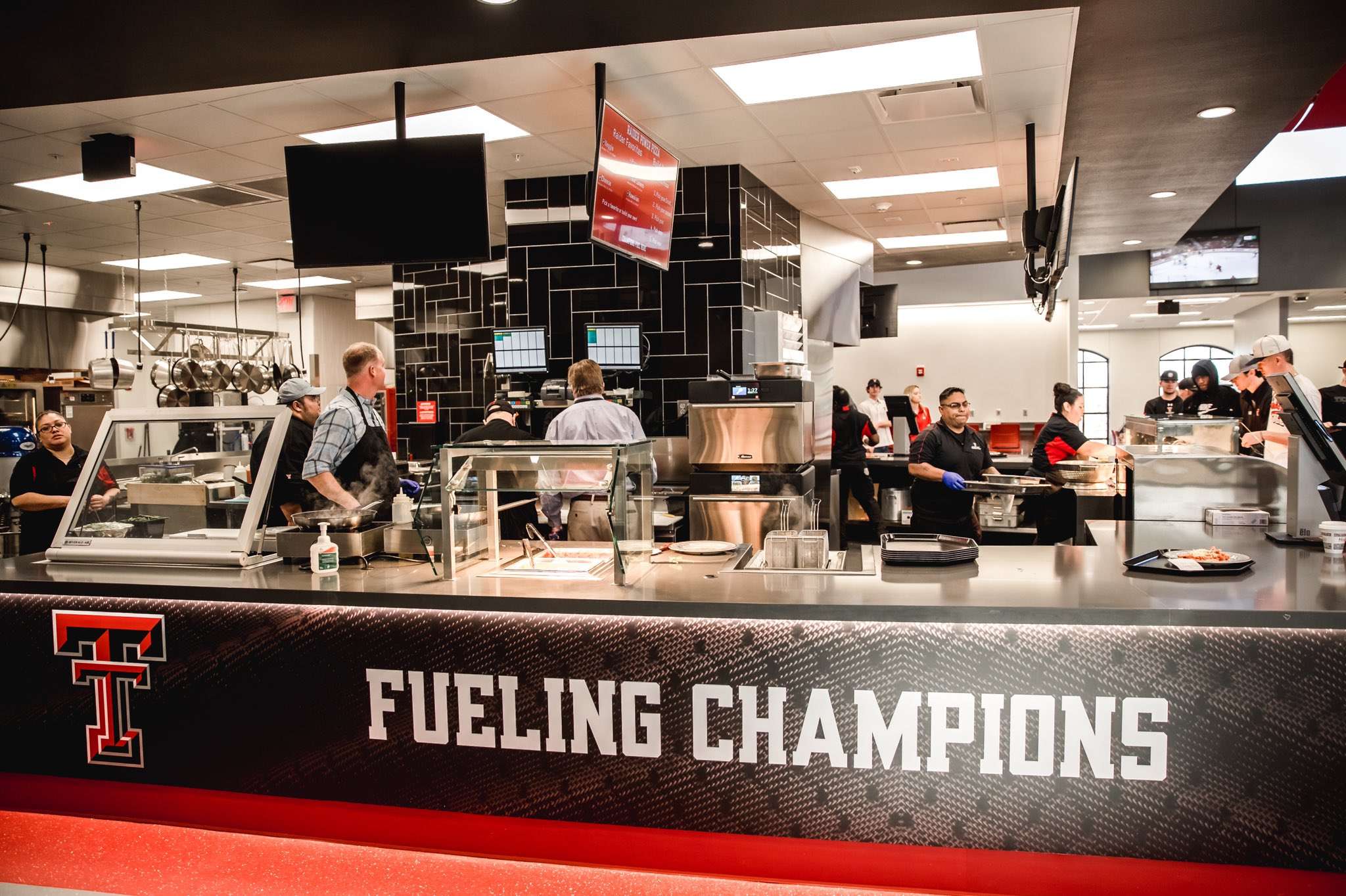 Texas Tech opened the new Cash Family Sports Nutrition Center, a state-of-the-art facility that will be the day-to-day dining location for the department’s more than 400 student athletes. The facility can seat 220 and features on-site meal preparations and touch-screen ordering that allows student athletes to quickly select from various food stations. And, of course, it wouldn’t be Texas if there wasn’t a smoker included in the cooking equipment.

Also inside the facility is the Dean and Christi Quinn Education Kitchen, which features seven residential cooking stations, which will allow Texas Tech’s nutritional staff to develop a cooking curriculum to help student athletes with cooking prep and storage. Chefs from around Lubbock will also be invite in for live cooking demonstrations.

Renderings were shared of Georgia‘s new football locker room, which includes air-conditioned lockers and reclining, wider seats. The new locker room will be housed inside the new $80 million football operations building being added to Butts-Mehre Athletics Complex. Also included is a game room that overlooks the indoor practice facility, an expanded weight room with 32 custom-built racks and various lounge areas.

Citadel unveiled its newly renovated weight room, the Dawg Pound. The $370,000 renovation was kicked off by a $75,000 anonymous donation. The renovation included paint and decor, equipment, flooring, performance technology, and office and storage space for a staff of six. A 20-yard turf surface was added inside the weight room for training and all new racks. Citadel says the biggest additions were in performance technology with the addition of Tendo units and Laser Timing System, which are rare at the FCS level.

Kansas State broke ground on its South Endzone project at Bill Snyder Family Stadium. The $52M project is expected to be complete prior to the 2021 football season and includes a new club/suite/loge premium seating area, expanded Legends Room event space and upgraded restrooms and concessions on the south concourse. The NW and NE entrances to Bramlage Coliseum will also be expanded by 17.5′, adding nearly 4,500sq-ft of additional concourse space inside Bramlage. The project is being funded from the $105M Building Champions capital initiative, which will also include a new volleyball arena, Olympic performance training center, new football indoor facility and outdoor practice field.

The Iowa Board of Regents issued $59.9M in revenue bonds to assist in the funding of a new Sports Performance Center near Jack Trice Stadium. The new center, along with improvements to Jack Trice Stadium and Bergstrom Football Complex, are estimated at $90M. The new Sports Performance Center is planned at 110,000 square feet and is intended for use by all student athletes. It will include a work out facility, dining center, academic space and locker room for the football team. Improvements to Jack Trice Stadium will begin this summer and be completed in time for the 2021 football season.

In addition to the new basketball arena coming at Texas, university regents have approved the funding of a $60M basketball practice and rowing facility to be financed with long-term bonds. Both the new Moody Center and practice facility need to be built ASAP to make way for the expansion of the Dell Medical School, which is why the school is going into debt with the hope of it being repaid with future donations. The new 75,200sq-ft practice facility, which will be adjacent to the new Moody Center, will include basketball courts, rooms for rowing ergometers, strength and conditioning, sports medicine, players’ lounges, meeting rooms, and coach and staff offices. The Moody Center is scheduled to open for the 2022-23 season, and the new practice facility is slated to be completed by June 2022.

Washington‘s Board of Regents approved plans to construct a new Basketball Training & Operations Facility and Health & High Performance Center. The project will include a new 60-70,000sqft building and a 14,000sqft renovation of the weight room and Husky Legends Center. The Basketball Training & Operations Facility will feature practice courts, locker rooms, recruiting/player lounges, firm rooms and a new front porch. The Health & High Performance Center will serve over 500 student athletes with services such as strength and conditioning, nutrition, mental health wellness, athletic training and medical services. With a projected budget of $60.5M, construction should begin in 2021 with completion planned for 2023.

Tulsa unveiled its new basketball performance center. The new space was added under the Reynolds Center.

An anonymous $60M gift to Binghamton (the largest in university history) will fund a new 84,000sqft baseball complex that will include a new stadium, clubhouse and indoor training facility. The new stadium will meeting NCAA requirements for hosting post-season tournament play. The indoor facility will include a turf infield, four-story ceiling, two running/spring lanes, four individual/configurable batting lanes and more. The complex will also include a HIIT space with a skyfold vertical glass folding partition to fully open space into the player’s lounge. The lounge will have nutrition and recreation areas as well has a Hall of Fame/recognition wall.

Cal Poly announced a $1M gift to jump start the final phase of a four-year project to upgrade Baggett Stadium. The improvements will include an improved entrance, new ticket booth, renovations to the baseball press box, chair back seating, batters eye and other cosmetic enhancements.

Illinois received a $3M lead gift for a new indoor softball practice facility. Estimated at $6M, the new 13,000sqft facility will be constructed as an addition to the existing clubhouse at Eichelberger Field and will include a full infield, hitting and pitching cages, a new recruiting lobby, hall of fame, expanded player lounge, increased storage and improved parking. Construction will begin in late 2020 with a planned completion of December 2021.

The upgrades being planned at Oklahoma’s L. Dale Mitchell Park received its second seven-figure gift. The planned $15M project will transform both the interior bowl and the exterior of the stadium. In addition, new locker rooms, training areas, coaches’ offices and team meeting areas will be added, along with chair-back seating, terraced berms and additional awnings and concourses. A new entry will include a Champions Lobby.

Princeton received its largest athletics alumna gift to help build a new softball stadium on the Lake Campus, the planned university development on the south side of Lake Carnegie. The park will have synthetic turf, a Hilltopper pitcher’s mound, stadium seating, a press box and concourse, batting cages and a new scoreboard. An adjacent new tennis and squash facility will include locker rooms for softball, coaches’ offices, an athlete lounge, study spaces, strength training and sports medicine facilities. The new softball stadium will become the first Princeton athletic field to be named by an alumna.

Northern Illinois unveiled a $4M, four-phase plan to upgrade its baseball facility. Additions include artificial turf both in the infield and outfield, lights, a new grandstand in place of the current bleachers, a new press box, permanent restrooms and concessions, a new indoor hitting facility with covered bullpens and existing bullpen and dugout spaces will be renovated.

JMU entered formal planning stages for its project at Sentara Park, home to lacrosse, men’s soccer, women’s soccer, track and field and cross country. Enhancements are aimed at improving the game day experience of student athletes and guests with addition of locker rooms, concessions and more. The project is slated to begin October 2020 and complete by summer 2021. Perhaps one of the biggest changes for student athletes will be the addition of locker rooms, which are currently located on another part of campus and requiring transportation for pre- and post-game activities.

A $5M gift sets the stage for SMU to build a new soccer and track stadium. The new stadium will keep the same footprint of the current Westcott Field and the 400-meter outdoor track. The new 2,577-capacity stadium will include a structure that houses new locker rooms and a team meeting/conference room.

BusinessofCollegeSports.com recognizes that esports are not (yet) governed by the NCAA. However, many of you have expressed interest in following the development of these facilities, so we will include them here as appropriate.

St. Mary’s will soon be home to San Antonio’s first collegiate esports arena, renovating an existing campus space into a gaming amphitheater this spring so it can launch a new esports program this fall. The university will invest $120-150,000 over the next year to get the esports program launched. The esports arena will be able to seat approximately 30 people and is being fitted with 15 Alienware gaming desktop computers, two Xbox One X consoles, two PlayStation 4 consoles, new glass doors and wall wraps. The renovation is approximately $60,000, not including new equipment costs.

Following lobbying by the insurance industry, the Florida legislature has effectively nullified two naming rights deals in the state for Roofclaim.com: a $35M deal for the football stadium at UCF and a $5M deal at FAU for its arena.