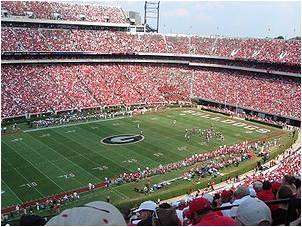 Is your team turning a profit in its athletic department? Is it spending in line with its revenue? Could this have any effect on performance on the field? Thanks to a federal statute requiring all colleges and universities that receive Title IV funding (federal student aid) to report the financials for their athletic department, I have the answers for you. (See the Note at the end for more information on this data.)

First, let’s take a look at how the schools rank in terms of revenue for just the football program. For added comparison, I have put each school’s stadium capacity next to their name, since that would have a direct effect on their ability to bring in revenue:

I’m sure it comes as no surprise to see perennial contenders like LSU, Florida and Alabama at the top.

Now let’s take a look at who the big spenders are:

Again, perennial contenders Alabama, LSU and Florida maintain their positions atop the list. However, take a look at Auburn, who ranks higher in terms of spending than revenue. Perhaps a foreshadowing of the 2010 season that was to come? And what about Georgia? They move from being the second highest in terms of revenue to only the seventh biggest spender.

In fact, Georgia brings in the most in terms of profits in SEC football because of their lower expenses relative to their revenues.  Their profit was over $8 million more than the next highest school, Florida:

Georgia isn’t just #1 in the SEC in terms of profits, they’re #2 in the entire country behind Texas.

If you do the math, Georgia is only putting 25.8% of their football revenue back into the program. Meanwhile, the 2009 National Champion, Alabama, was putting 43.3% back into their program, and the 2010 National Champion, Auburn, invested 42.2 percent. Is there perhaps a correlation between this and results on the field? Georgia went 7-5 in 2009 and just 6-6 in 2010. Comparing Georgia to Texas, who is the only school with bigger profits from football, the two are spending at about the same rate, with Texas putting 26.7% back into their program.  However, Texas is spending $25,112,331 to Georgia’s $18,308,654.

Can these 2009 numbers predict the future for Georgia? Take a look at the teams ahead of Georgia in terms of expenses (in the second chart above). In 2010, Georgia lost to every team they played who spent more than them in 2009: Florida, Arkansas and South Carolina.

Just some food for thought as we all spend the offseason pondering what went wrong in 2010 for our respective teams and what we can expect in 2011.

It’s also important to note that this data is from July 1, 2009 to June 30, 2010, so we’re talking about the 2009 football season.  Additionally, while these are the most complete numbers available for all SEC schools (a public records request wouldn’t get you financial information for the private schools), there is room for variance.

The Aspirational Bowl
How Big is the Big Ten Financially?