Boston College to Wear Uniforms Inspired by “Miracle in Miami” 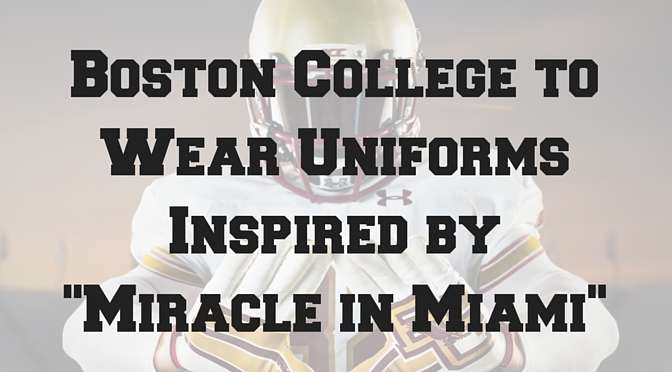 Boston College and Notre Dame meet this weekend at Fenway Park. Two programs steeped in history and tradition playing in one of the most historically-significant sports venues still standing, both with a rich Catholic tradition.

To add to the sense of nostalgia and history, BC will be wearing throwback uniforms inspired by the “Miracle in Miami.” And no ordinary uniform reveal would do. Under Armour and BC had someone very special unveil the uniforms: Doug Flutie, architect of the “Miracle in Miami.” BC was playing Miami in the Orange Bowl on November 23, 1984 when Doug Flutie threw a last-second touchdown pass to Gerard Phelan to give the No. 10 Eagles a 47-45 win over 12th-ranked Miami.

The “Holy War,” as its been dubbed, has been played 22 times with Notre Dame leading the series 13-9. The two first met in 1975 not too far from this year’s venue at Foxboro Stadium.

BC and Notre Dame are the only two remaining Catholic institutions playing at the FBS level.

College Football Playoff Payouts Might Favor Some Conferences
How Will Rams’ Move to LA Impact USC and UCLA?