If all of the top 100 teams from the state of Texas win on opening weekend, Bud Light fans might become the biggest winners 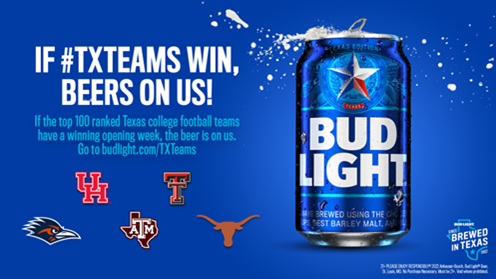 Why Texas? Bud Light has been brewed there since 1982 and Texas boasts the most ranked teams of any state in the country.

All teams play on September 3 and chances of free beer look extremely promising. UTSA (ranked No. 62) is coming off a conference championship win. In their only 12 seasons of play, they’re also relishing in a 10-game winning streak at home. UTSA is set to face UH during opening weekend this year. UH (ranked No. 22) lost last year’s Texas kickoff game to Texas Tech, 38-21.

On the Power Five level, Texas Tech (ranked No. 68) takes on Murray State and allowed fans to select the game time since the game will be streamed. The Texas Longhorns (ranked No. 29) are favored to beat their UL-Monroe opponent, which finished last season with a 4-8 record. Texas A&M (ranked No. 9) takes on Sam Houston with 98% of fans expecting the Aggies to win.

All fans can follow the #TXTeams hashtags to track these Bud Light-sponsored Texas teams’ progress (and others, all ranked in the Top 100 as well – SMU vs North Texas, Baylor, TCU, UTEP), and see other fans’ excitement for this initiative. Head here to see where you can snag your free beer if all of the #TXTeams pull off a victory.

Which College Sport is Most Popular?
How to Spend the Perfect College Football Saturday in Columbus, Ohio