Where Does Notre Dame Fall Financially? 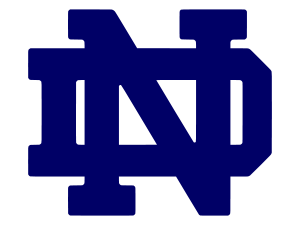 After writing about the football finances of the SEC, Big Ten, ACC,  Pac-10, Big 12 and Big East, I found myself wondering where Notre Dame fit into the financial picture.  The numbers are drawn from schools’ reports to the U.S. Department of Education on the state of their athletic departments’ finances for July 1, 2009 to June 30, 2010. See the note at the end for more details on the data.

I think we can all conceded that if Notre Dame were to join a conference for football, it would be the Big Ten. As you can see, Notre Dame would be the second-highest revenue generator of all Big Ten football programs:

They would also come in second in terms of money spent on football:

You’ve seen how they stack up with programs from the Big Ten, but how well is Notre Dame really doing?

First, here’s some context. A report from the NCAA indicates that only 14 Division 1 schools broke even or made money in their athletic department last year without institutional support, and only 6 schools did it in each of the years from 2004-2009. Which means that most of the schools you’ve seen turning a profit in my series have been doing so with the aid of monies from outside the athletic department. For example, University of Virginia and Georgia Tech indicated to me they received upwards of $12 million and $4 million a year, respectively, from student activity fees. That is considered direct institutional support. In fact, the average amount of institutional support received by athletic departments went up from $8m in 2007-2008 to $10.2m in 2008-2009.

Although the NCAA did not list the 14 schools turning a net profit, Notre Dame is one of them. Athletic Director, Jack Swarbrick, has revealed that Notre Dame actually pours money back into the college’s coffers, to the tune of about $10 million in 2009.

Unlike the other 13 schools on the list, Notre Dame is able to turn a profit without being part of a conference. They have their own lucrative television contract, rumored to garner them about $15m a year. However, Notre Dame finance professor Richard Sheehan, who was involved with the NBC negotiations, has said the rumored value is low. “The NBC contract is more lucrative than pretty much anyone knows,” he says.

In addition, Notre Dame receives a $4.5 million for each appearance in a BCS bowl and $1.3 million even if they aren’t selected for a BCS bowl. While that may seem like a lot, it’s about 75 percent less than they were receiving at the BCS’s inception. This is one of the reasons many wonder how much longer they can remain independent, but as the profit numbers show, the Irish’s athletic department isn’t exactly hurting financially.

For now, Notre Dame values its independence more than the extra millions that could be lining their pockets if they joined the Big Ten. We all chastise athletes, schools and leagues who put making money above all else. Why don’t we celebrate Notre Dame for honoring its history and own set of priorities?

Money Not As Big in Big East Football
Which SEC Alumni Have the Deepest Pockets?