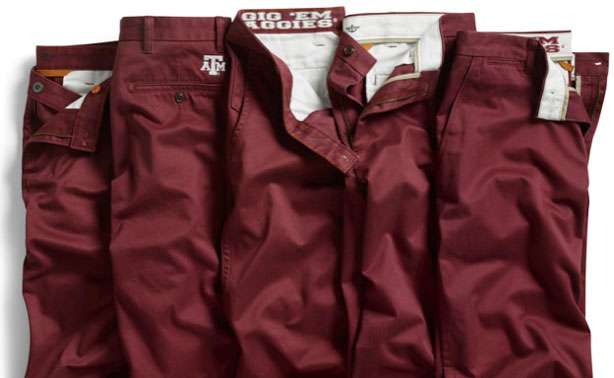 Last fall, Dockers launched its Game Day Khakis, which feature an internal stamp of the school slogan and an embroidered school logo on the exterior. It was Dockers first foray into the world of collegiate athletics merchandise, and no doubt an attempt to capitalize on the $4.6 billion collegiate-licensed apparel market.

Dockers’ vice president and chief marketing officer Adrienne Lofton Shaw told me during the launch last fall that although the company’s initial Game Day line only featured 10 universities, there were plans to expand.

“Know that very quickly — within the next couple of months — we’re going to be expanding beyond these 10 schools,” Shaw said in August. “Our goal will be not only to grow 10 schools every season, but also we’re looking at how do we create a custom program where [fans] can go to Dockers.com and be able to get any school they want.”

Well, Dockers has made good on the first part of its promise, announcing 10 more universities today.

In addition, Dockers has added shorts as a third fit in the line, accompanying the classic and alpha fits.

Dockers now has 14 of the Top 25 universities for licensing sales, as ranked by Collegiate Licensing Company, who handles licensing for nearly 200 colleges, universities, bowl games, athletic conferences, the Heisman Trophy and the NCAA.

CLC’s Top 25 for the last quarter were (emphasis added for universities licensed by Dockers):

(1.) The University of Texas at Austin

(2.) The University of Alabama

(4.) The University of Michigan

(11.) The University of Oklahoma

(23.) The University of Kansas

What university would you like Dockers to expand to include?