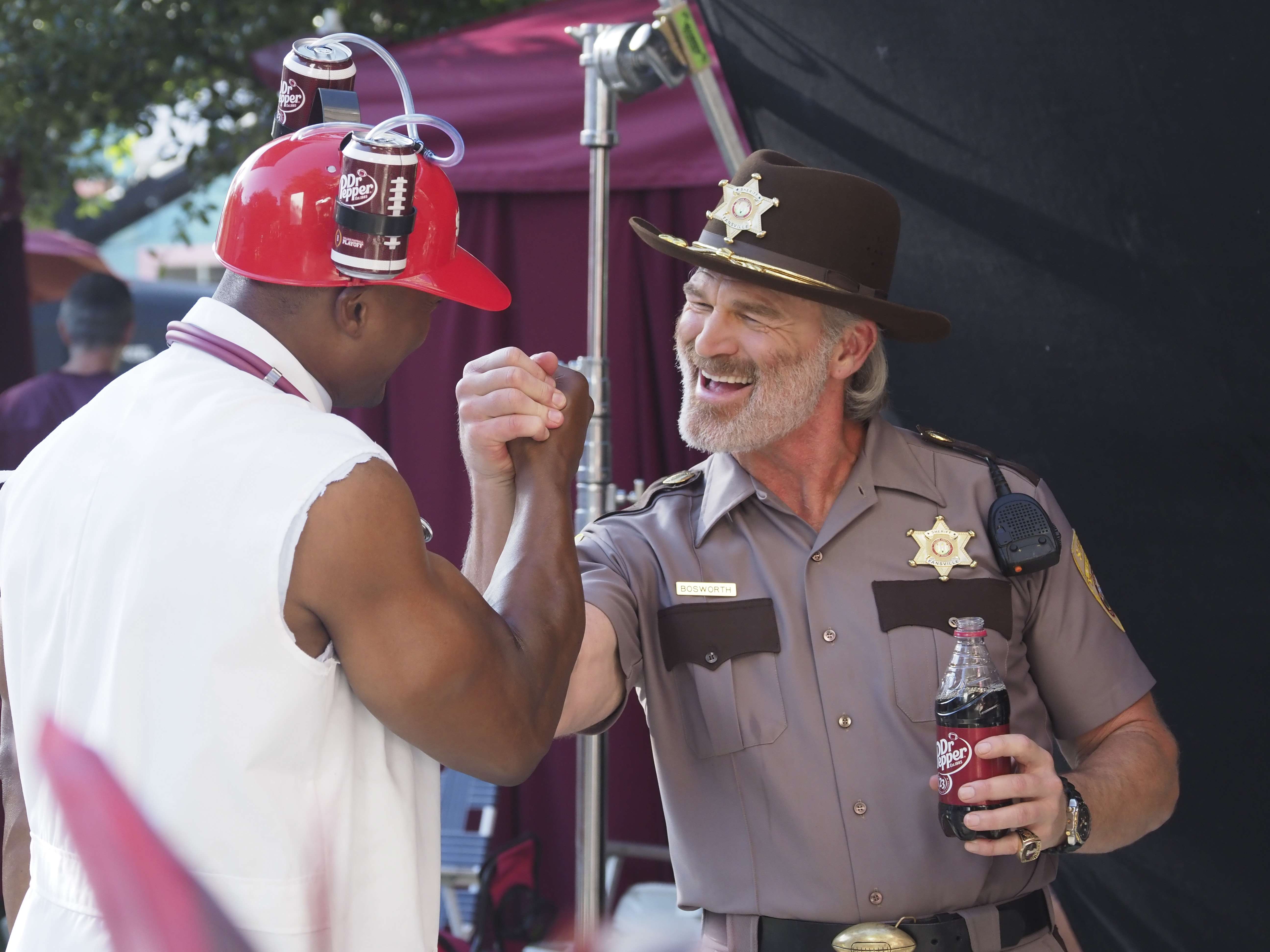 College football is upon us, which means a new season of Dr Pepper’s parody drama TV show “Fansville” is on the way. Renewed for a second season, fan favorites Brian Bosworth and Eddie George are reprising their roles as the “Sheriff” and the “Doctor,” respectively, for a new story line the brand promises will end in a shocking finale.

This episodic-like marketing campaign tells the story of fans in the fictional town of Fansville, where nothing trumps college football. Dr Pepper’s vice president of brand marketing Derek Dabrowski says when the brand looked at the metrics from last season, it was clear “Fansville” should get renewed.

“The metrics were the solidifying factor in the decision to move forward,” says Dabrowski.” If you look at the tropes you can dive into with some of these dramatic televisions series and sitcoms over the past decade and combine that with college football, and areas that care about college football, the stories are essentially endless.”

Asked what fans can expect from this season, Dabrowski says, “I think you’ll see way more drama, way more football, way more fans and way more Dr Pepper, with a really fun culmination at the end of the year.”

Bosworth and George both say the decision to return for season two of “Fansville” was an easy one. And although the integrity of the company and its product is of utmost importance to George, he says this decision was made even easier by a very personal connection to the brand.

“The fact that both of my sons are Dr Pepper fans in terms of actually drinking the soda made it really a no-brainer,” says George.

“My sons loved [last season]. Dr Pepper did an outstanding job of bringing my character the ‘Doctor’ to life and this town that only cares about winning.”

Bosworth cites his own personal ties to the beverage company.

“Growing up as a kid in Oklahoma and Texas, Dr Pepper was one of my favorite drinks,” says Bosworth. “It was an honor doing it. College football to me is a very special feeling and time in my life.”

“I remember getting up to do chores at 5:30 in the morning with my grandfather on his farm, and my reward was soft drinks. He’d give me a six-pack of Dr Pepper and tell me, ‘Maybe one day you’ll be good enough to come play at Oklahoma.'”

Bosworth says he brings a little bit of that experience he did ultimately have at Oklahoma to his role as “Sheriff.”

“I equate being the Sheriff of ‘Fansville’ to being Barry Switzer when he was my coach. He was no nonsense. He had swagger.”

George thinks part of what makes “Fansville” so special is that there’s something in the series that all fans of college football can relate to as well.

“It’s a fun [campaign] that really celebrates Dr Pepper’s commitment to college football and merges the sport and the fan community,” he says. “Fans understand that roller coaster of being a college football fan.”

Dabrowski says the real message here is all about fun.

Dr Pepper is an official sponsor of the College Football Playoff and Presenting Sponsor of the National Championship Trophy through 2026. This season also marks the 11th anniversary of the Dr Pepper Tuition Giveaway, which has awarded over $10 million to college students.

The “Fansville” ad campaign will premiere on Monday, August 19 with the first of its nine unique ad spots. The season finale will air during the National Championship on January 13, 2020.