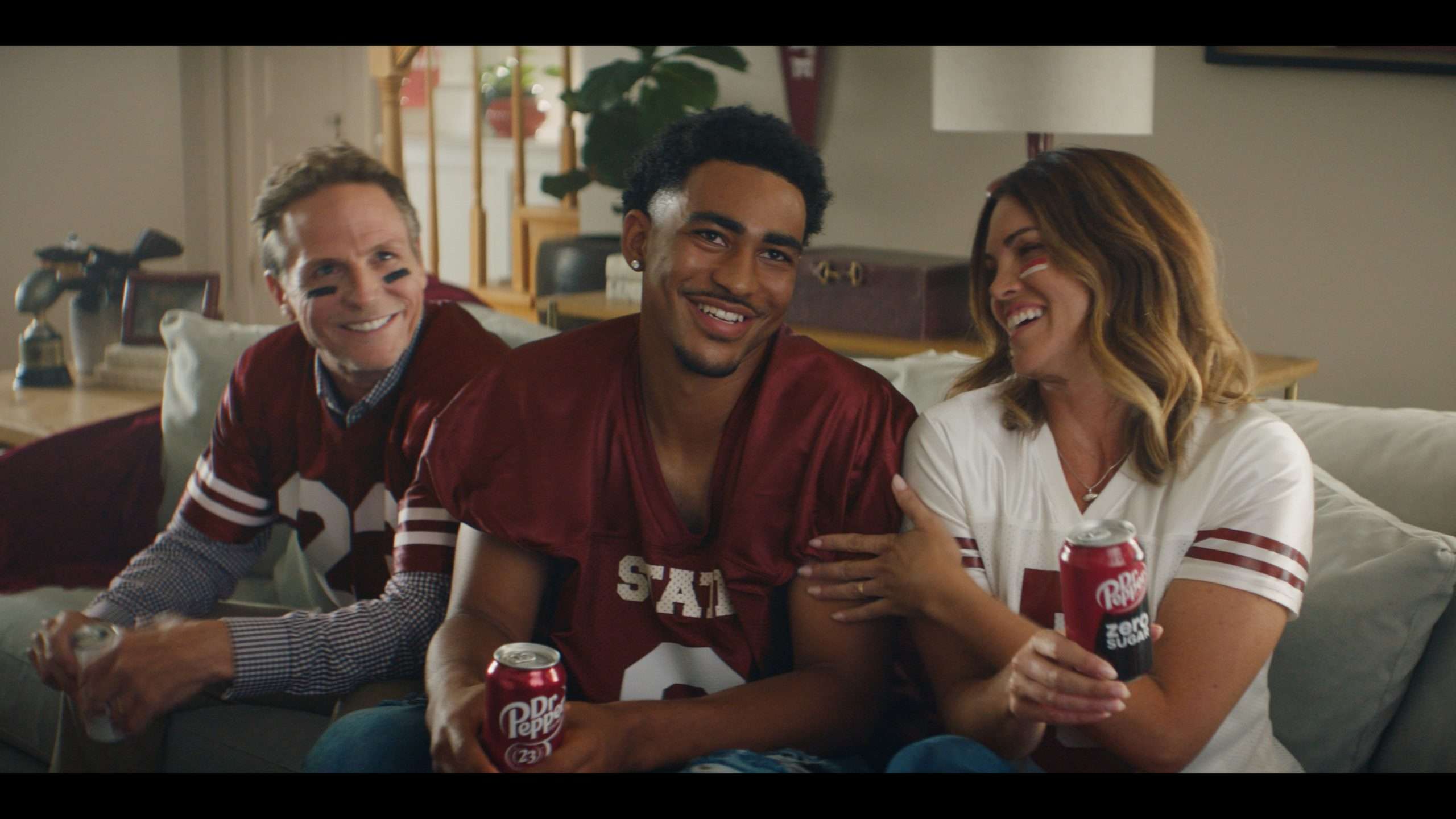 “It was a lot of fun,” Young said. “I don’t know if I’m going to give up my football career anytime soon, but I’m proud of the way everything turned out and I’m really excited for everyone to see the commercials. I hope everyone has some fun with them.”

Last season, Dr Pepper was one of the first national brands to sign a college athlete to an NIL deal when it tapped Clemson quarterback DJ Uiagalelei for “Fansville.” Fans questioned if Dr Pepper regretted the choice after Uiagalelei’s performance on the field fell below expectations.

John Alvarado, senior vice president of brand marketing for carbonated soft drinks at Dr Pepper, says there’s no regret, and it didn’t impact their decision to use another student athlete for the campaign this year.

“DJ was a great partner last year and we are appreciative of the opportunity to work with him in our first year with NIL partners. Fansville is all about fandom, which means supporting your teams through thick and thin.”

Alvarado says Young is a great fit for this year’s campaign because of his affinity for the brand.

“Not only is Bryce one of the greatest collegiate athletes in college sports, but he fits perfectly in the Dr Pepper family. As a fan of the brand, he emulates what the brand stands for and represents our message around everyone being ‘deserving’ of a Dr Pepper.”

Young says Dr Pepper has been part of his life since childhood.

“Dr Pepper is one of the brands that I grew up with and I feel like they have such a strong love for the game of football, just like I do.  I have many memories growing up and watching the Dr Pepper halftime shows during big games. To be a part of such a great tradition was really special to me.”

In addition to familiar faces throughout the cast, “Fansville” will keep with its tradition of integrating real-life storylines from college football in its episodic series throughout the season.

“Overall, we’re excited to see how college sports have evolved and progressed over the years,” said Alvarado. “For the athletes playing these sports, it’s exciting to see the countless opportunities that they’re becoming exposed to earlier on in their careers. For the college football fans, it’s exciting to watch them get even more involved in their favorite collegiate athletes and sports.”

Although this is the fifth year of “Fansville,” Alvarado says it’s been easy to keep the storylines fresh each season.

“We have a highly talented team who are passionate fans themselves and are constantly coming up with creative and unique scripts that keep the fans of Fansville coming back season after season. We’ve also been fortunate to have high caliber talent featured in the campaign year after year that make Fansville feel special and fresh each year.”

“Fansville represents the highs , the lows, and the chaos of being a fan of college football, but with a light-hearted, fun and relatable twist. Every year fans are excited to see who will be featured in the new spot and what the new storyline will be. We’re grateful for our fans and are always so excited for them to see the new season.”

Young agrees and says it’s why he’s excited to be part of “Fansville” this season.

“Dr Pepper puts their fans first, just like I do. I appreciate all the fans that support me and the game of football. It was fun to be a part of ‘Fansville’ in these commercials and get a glimpse into what it feels like to be a fan for day.”

“Fansville” will air episodic content through the 2022-2023 college football season.