Pro hockey and baseball teams are partnering with student athletes. 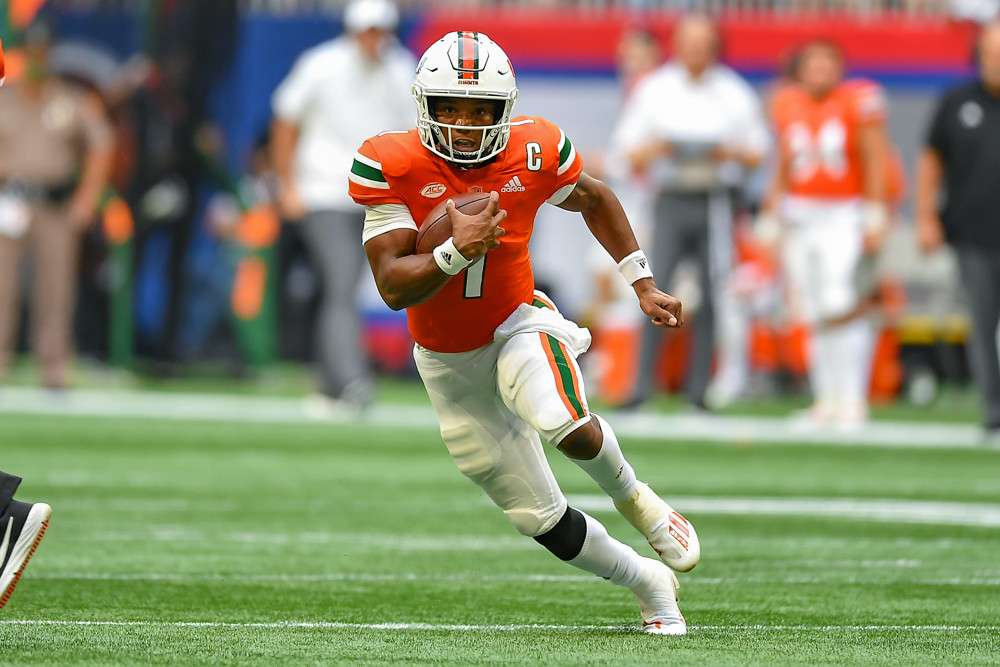 Since student athletes were approved to begin profiting from their name, image, and likeness on July 1st, there’s been no shortage of deals that have been signed across the country. From major national corporations all the way down to local mom and pop shops, all kinds of businesses are seeing the benefit of student athletes promoting their brands.

When we think of professional sports teams, we tend to get caught up in the results on the field, court, or ice. While wins and losses are undoubtedly a huge part of any sports franchise, we often forget that they are also large corporations that care just as much about their branding and image as any conventional business out there.

When the Florida Panthers announced an NIL agreement with University of Miami quarterback D’Eriq King on August 9th, it was a first-of-its-kind type of NIL deal. Soon after, the Atlanta Braves followed suit with two deals of their own with University of Georgia gymnast Rachel Baumann and Georgia Tech quarterback Jordan Yates.

For restaurants, car dealerships, or beverage companies, the concept of the endorsements are self-explanatory. But what exactly does an NIL agreement with a professional sports team look like? Let’s look at the details of both the Panthers and the Braves deals and try to comprehend the motivation behind them.

When NIL came into effect, D’Eriq King didn’t waste any time securing his share of deals. After co-founding Dreamfield, an Orlando-based company that is helping pair college athletes with businesses to help coordinate them being paid to make in-person appearances, King has also signed deals with College Hunks Hauling Junk (Moving Company), Murphy Auto Group, and The Wharf (Miami Bar and Event Space).

His opportunistic approach to business inquiries continued into August when he signed the first NIL deal associated with a professional sports team. The Florida Panthers, an NHL franchise located in Miami, announced that King would become the team’s first “FLA Athlete.”

In his “FLA Athlete” role, King will appear at Panthers games and events and work closely with the Panthers digital and social media teams to produce content to engage the fanbase across South Florida. Additionally, King will work with the Panthers to develop a merchandise collection, co-branded art, and his own exclusive BB&T Center concession menu item, which will be available at all Panthers home games and events for the upcoming season.

“We are thrilled to welcome D’Eriq to Panthers Territory as our first ‘FLA Athlete’,” said the team’s Chief Strategy Officer Sam Doerr. He added, “D’Eriq is a superstar both on and off the field and we are excited to reach and engage South Florida sports fans in new ways through this collaborative partnership.”

On Territory Talk, part of the Panthers Podcast Network, King said he didn’t have any specific connection to hockey, but noted he “liked how aggressive [hockey] is” and how it is “like football on ice” and didn’t restrain his excitement for the partnership. The terms of the payments were not disclosed.

The Panthers also announced today an offer to all female student athletes at FAU.

“We’re so excited to announce this next stage of our ‘FLA Athlete’ program and bring an entire collegiate athlete women’s program into our Panthers family,” said Doerr. “We look forward to supporting and collaborating with these talented female athletes in our South Florida community on innovative ideas and events in South Florida.”

The Atlanta Braves deals with Rachel Baumann and Jordan Yates

MLB’s Atlanta Braves took a little bit of a different approach in how they came to their NIL deals. On July 7th (the first week of NIL), the Braves took to Instagram to invite student athletes to “apply” for partnership with the team. In the post, they laid out three prerequisites to be considered for partnership: they had to be a Braves fan, they needed to be a student athlete at a school in “Braves country” (a large chunk of the Southeast from Mississippi to North Carolina), and they needed to be active on social media.

Through the partnership, both athletes will attend select Braves games at Truist Park and will work closely with the club’s social media and marketing teams to chronicle their experiences. The pair will receive stipends, merchandise, VIP treatment, and commission on tickets sold through their social media platforms.

“We are excited to welcome Rachel and Jordan to the Braves family,” Braves executive Greg Mize said in a statement. “As soon as the new NIL guidelines were set last month, we knew there was an opportunity to highlight the convergence of Braves Country and strong local athletes.”

“For our first partnerships, we wanted to focus on schools in our backyard, and the hope is the program will continue to expand to include student-athletes from throughout Braves Country.”

The Reno Aces were the third professional sports team to jump into the NIL space. On August 24th, the Aces announced a partnership with four Nevada Wolf Pack football players including Kameron Toomer, Daiyan Henley, Elijah Cooks and Carson Strong. The most notable of the four is quarterback Carson Strong, who is a potential early round pick in the 2022 NFL Draft.

As the Triple-A affiliate of the Arizona Diamondbacks, the Aces offering of NIL deals are significant because they are the first minor league franchise in any sport to do so. Without any revenue via television contracts like NFL, NBA, MLB, and NHL teams receive, Minor League teams rely almost exclusively on gate revenue to generate income. To top it off, the Minor League season in baseball only lasts five months, so teams have a small window of time to make money.

The Aces deals with well-known University of Nevada football players, who are right there in Reno, might be an effective way to bring more Wolf Pack fans to ballgames. As part of the agreement, the four players will attend games at Greater Nevada Field in the future, especially the Aces’ “Coors Light Thirsty Thursday” promotion, while also appearing at the “College Nights” at the ballpark. University of Nevada students will also get discounted rates at Thursday home games moving forward.

“We’re excited to be partnering with local athletes and students in Northern Nevada,” Reno Aces marketing director Vince Ruffino state in a news release. “We hope to establish strong bonds with these student-athletes that we can carry over into future seasons, and we have brought in a dynamic group of individuals to partner with us this year.”

The Aces didn’t release the terms or dollar amounts in the deal.

The Savannah Bananas, part of the collegiate summer Coastal Plains League, outfitted their team on July 30th with 29 unique jerseys featuring the player’s picture. The game-worn jerseys were then auctioned off, with all profits divided evenly between the student athletes.

In addition, replica jerseys were made available, with $20 from every replica jersey going to the individual player whose jersey was sold.

“We’ve been looking forward to this day for a long time,” said Jared Orton, Bananas Team President. “This will be the first time that players’ faces can and will be on their own jersey. It’s historic for college athletes and it’s huge for the fans of these players.”

The Relationship Between Pro Sports Teams and Student Athletes

From a student athlete perspective, it’s easy to see why they would be interested in partnering with a pro sports team. Obviously, they’re making some money, so that’s something that always will be a motive. But beyond just the financial component, linking up with a business that gets more coverage on the local and national level could build their brands far more than simply endorsing a restaurant or beverage company.

But what is the motivation from the team’s side? Is the partnership really worth it for the Panthers, Braves, and Aces? From the outside, we’ll probably never know the true answer in terms of added revenue. But the concept of connecting their brands with prominent student athletes could be something we see from other franchises moving forward.

Now, I don’t know if this strategy would play well in cities where the passion for college sports pales in comparison to the local pro teams. But in cities like Miami and Atlanta, the overlap of pro and college sports fans is fairly high.

Football reigns supreme in the state of Florida, and hockey seems a little out of place in Miami. This is backed up by the fact that the Panthers regularly rank near the bottom of the NHL in attendance. Therefore, by connecting the University of Miami football team to their franchise, the Panthers might bring in interest that might otherwise not have been there.

On a random Tuesday Night in December, the casual fan might not be motivated to head to the BB&T Center for a Panthers game. But if D’Eriq King is signing autographs or running a promotion, a fan (especially one who is a Hurricanes fan as well) might have more desire to buy a ticket.

The same goes for the Aces where generating ticket sales is one of the only sources of revenue as a minor league team not privy to television contracts. Wolf Pack fans in Reno might want to head to an Aces game on a Thursday night because they might get the opportunity to meet Carson Strong or the other three football players signed by the club.

While the Braves have been around longer and have more prestige, the same principle can be applied to them. Baseball season is long and generating excitement for each individual game is difficult for any team. But with two student athletes that appeal to the local fan base involved both in the park and on social media, the Braves unlock more appeal.

The social media aspect cannot be understated either. Gaining interest from the next generation of fans is something that people in sports media talk about ad nauseum, and the use of social media by prominent young athletes could be a way to create excitement around the team. Part of Baumann and Yates’ role with the Braves will be chronicling their experiences surrounding the team, which could allow someone who has never been to a Braves game before a look at how much fun they could have at a ballgame at Truist Park.

While we’ve only had these few professional sports teams jump into the NIL space so far, I don’t think they’ll be the last. An important part of Braves executive Greg Mize’s statement was his desire for the team’s NIL dealings to “continue to expand,” and I don’t think the Braves will be alone in seeking out prominent student athletes to form valuable partnerships for both sides.